The Ark of Truth- Mother's Hood

4 out of 5 dentists recommend this WordPress.com site

Is coronavirus a disease that was bioenginnered?  If it was, does it make a difference as to how potent it is?

END_OF_DOCUMENT_TOKEN_TO_BE_REPLACED

This following is from Max Kappeler’s book Epitomes for the Spiritually Structured Interpretation of the Christian Science Textbook.[1]  Kappeler’s book covers the whole book of SCIENCE AND HEALTH WITH KEY TO THE SCRIPTURES, by Mary Baker Eddy.  I wanted to share this with you, in case it may help explain to you, in more detail the tones covering the fifteenth chapter of “Genesis”.  {My interpolations will be in this type of bracket.}  It is all in media layout because I could not present it to you as I wanted to without doing it this way.

END_OF_DOCUMENT_TOKEN_TO_BE_REPLACED

From this point onward in “Genesis” is Part 3 (Mary Baker Eddy does not assign part numbers to chapter fifteen) or the third section.  The last BIBLE verse of Part 2 was Genesis 4:16 about Cain dwelling in the land of Nod (dreamland).  Nod actually means “ashes” or “to incinerate”.  So to me, the land of Nod could actually mean death.  Is not mortal life said to begin with dust (nothingness)?  Is this birth into ash or dust able to lead us anywhere but to death in dust or ashes?    “Ashes to ashes, dust to dust” are the words used by some priests at funerals.  Because Adam fell asleep and never woke up it is safe to say that his offspring of error, Cain, lives in dreamland (the land of Nod).  I believe the land of Nod means ‘a place or consciousness of sleep or slumber’ because of the phrase “he nodded off”.  It comes from the nod of one’s head.  But, if we take the different meanings of nod and put them together, it could simply mean that the whole belief that you are born into matter and then die out of matter (ashes to ashes, dust to dust) is nothing but a big fat dream!

END_OF_DOCUMENT_TOKEN_TO_BE_REPLACED

[Truth as Principle – Man’s oneness with God (Principle) is expressed in the wholeness of manhood and womanhood – one-in-all and all-in-one – and Soul as the Christ as the Christ within the Word as Christianity]
Genesis 1. 27.  So God created man in His own image, in the image of God created He him, male and female created He them.

Ideal man and woman
To emphasize this momentous thought, it is repeated that God made man in His own image, to reflect the divine Spirit.  It follows that man is a generic term.  Masculine, feminine, and neuter genders are human concepts.  In one of the ancient languages the word for man is used also as the synonym of mind.  This definition has been weakened by anthropomorphism, or a humanization of Deity.  The word anthropomorphic, in such a phrase as “an anthropomorphic God,” is derived from two Greek words, signifying man and form, and may be defined as a mortally mental attempt to reduce Deity to corporeality.  The life-giving quality of Mind is Spirit, not matter.  The ideal man corresponds to creation, to intelligence, and to Truth.  The ideal woman corresponds to Life and to Love.  In divine Science, we have not as much authority for considering God masculine, as we have for considering Him feminine, for Love imparts the clearest idea of Deity.
[Think about it, if man is actually a synonym of mind then why are today’s Left (those who claim to be feminists or on the feminists’ side?) so against the word?  Why do they think it is a horrible word and why do they sick the thought police on it and try to change words like manhole?  I will go so far in saying that mentality could mean “mantality”.  The reason why the Left is against the word has nothing to do with sexual inequality and everything to do with the anti-Christ.

END_OF_DOCUMENT_TOKEN_TO_BE_REPLACED

After posting WHAT DO WE REALLY KNOW ABOUT THE BIBLE? I decided that I would go ahead and post this series with it, as I feel that they go with each other.

SEVEN DAYS – “the numerals of infinity”

And I appeared unto Abraham, unto Isaac, and unto Jacob by the name of God Almighty; but by My name Jehovah was I not known to them. — Exodus.

All things were made by Him; and without Him was not anything made that was made.  In Him was life; and the life was the light of man. — John.

Why is the first BIBLE verse so important to understanding the book of Genesis?  It is because this verse means that the Patriarchs did not know the Lord God Jehovah of the second creation story (Genesis 2:4 onward) but knew only the God Elohim, the God Almighty of the first creation story (Genesis 1-2:3).  Likewise, the second BIBLE verse is equally important in understanding the difference between the two creation stories because God made all things Spirit (Elohim) not matter (Jehovah).  God is Life itself, and the Life that is God is the Light (Mind) of man – spoken of in the first creation story.
The BIBLE tells us that one day with the Lord is as a thousand years.  So what does that mean exactly?  It is a clue to one way in which we should examine the Seven Days spoken of in Genesis 1-2:3.  In other words, we do not need to think of them as seven days with twenty-four hours each but we should think of them as a period of seven thousand years, with each day lasting around 1,000 years.  Mary Baker Eddy writes:  “The numerals of infinity, called seven days, can never be reckoned according to the calendar of time.  These days will appear as mortality disappears, and they will reveal eternity, newness of Life, in which all sense of error forever disappears and thought accepts the divine infinite calculus [of the Word, the Christ, Christianity, and Science].” (SCIENCE AND HEALTH WITH KEY TO THE SCRIPTURES, page 520:10-15)  In other words, it takes about 7,000 years, so it would seem, for mankind to mentally progress through the Seven Days.

END_OF_DOCUMENT_TOKEN_TO_BE_REPLACED

WHAT DO WE REALLY KNOW ABOUT THE BIBLE?

Before I speak about the difference between the two creation accounts I would like to present to you an excerpt from a book called FROM REVELATION TO GENESIS, written by Englishman, W. Gordon Brown.  In these few pages, beginning on page 10, he explains how the BIBLE came to be written.  (I always capitalize the word BIBLE entirely (unless I am quoting another source) because I feel it points to the importance of the masculine BIBLE over all other books, besides its feminine mate, in the world.)  [In this first section my interpolations will be in this type of bracket.]

END_OF_DOCUMENT_TOKEN_TO_BE_REPLACED

The following is from Andrew W. Hartsook’s THE BANNER Volume 33, Number 2, Winter 2020 edition.  It tells the world just how dishonest the Board of Directors has been over the years, and discusses the Trusts.  {My interpolations will be in this type of bracket.}

END_OF_DOCUMENT_TOKEN_TO_BE_REPLACED

In the Book of St. Matthew (which is in the tone of the Word) chapter one presents forty generations from Abraham to Jesus.  This number forty symbolizes the generation of man’s spiritual birth, because a woman is pregnant for forty weeks.  In Matthew the lineage goes only back to Abraham, the first father of the Israelites (in the Third Day of Soul).  The Lord God Jehovah is not the God Almighty that Abraham, Isaac, and Jacob knew.  Yet in the Book of St. Luke (which is in the tone of Christianity) Jesus lineage goes all the way back to Adam (a man of sin) being “the son of God.”  I believe that there is a specific reason for this.  I believe that the Word begins with a spiritual type of manhood (Jesus), while Christianity seems to lead us back to the pure idea or our true being – God.  When this happens we find that we are home in heaven.  Yet perhaps a Bible verse from John 16:28 helps explain the difference between the two lineages of Jesus.  Matthew (the Word) – “I came forth from the Father,” Mark (the Christ) – “and am come into the world again, I leave the world,” Luke (Christianity) – “and go to the Father”.  Mary Baker Eddy tells us, “Science unfolds the eternal verity, that man is the spiritual, eternal reflection of God” (S&H 296:2).

END_OF_DOCUMENT_TOKEN_TO_BE_REPLACED

Recently mainstream media (the Liberal Press) and the Democrats have been spewing forth propaganda that followers of President Trump are in a cult, that President Trump is a cult leader.
First off I would like to say, that I am willing to accept that I am part of the cult because I understand what the word cult REALLY means!  So, let us examine the word cult in order to educate the mainstream media-Liberal Press and Democrats.
The first thing that Webster’s New Collegiate Dictionary says about cult is as follows:  “[adoration; to cultivate—more at WHEEL].”  Adoration has to do with adoring someone or perhaps some god or even the one God.  So we could say that religions in general could be considered as cults.  What does cultivate mean?  “1:  to prepare or prepare and use for the raising of crops; specif:  to loosen or break up the soil about (growing plants)  2  1:  to foster the growth of  b:  culture  2a  c:  to improve by labor, care, or study:  refine  3:  further encourage  4:  to seek the society of:   make friends with.”[1]  Well, can we accept that the followers of President Trump are farmers?  Some of them are, for sure, but not all of them.  So, let us look to 2a  c’s definition.  Culture is an improvement of mankind through three things – labor, care, and study.  And these things refine (improve, perfect by pruning or polishing; to free from what is coarse, vulgar, or uncouth; to become pure and perfected[2]) mankind.  So, again, being part of a cult seems to be a pretty good thing to me!

END_OF_DOCUMENT_TOKEN_TO_BE_REPLACED

Chapter 16 of Bliss Knapp’s book The Destiny of The Mother Church is titled “Prophecy”.  It begins on page 236 with the picture seen below.  In the top left hand corner, on the Side of Life, there is Jesus and Mary Baker Eddy (there are also other less defined figures in the clouds).  Then with hands in prayer fashion and looking to heaven, more in the center, but near the Side of Light there is the man child. 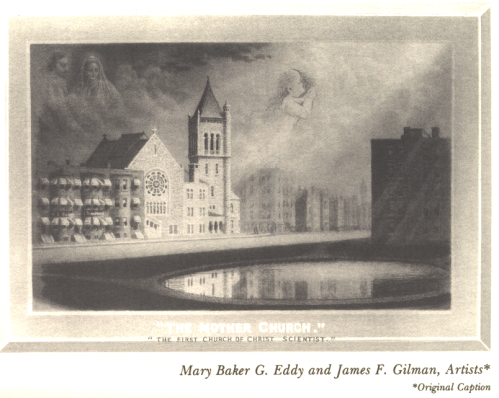