The Ark of Truth- Mother's Hood

4 out of 5 dentists recommend this WordPress.com site

MRS. EDDY’S EXPLANATION OF THE ILLUSTRATED POEM “CHRIST AND CHRISTMAS”  AS GIVEN BY JUDGE SEPTIMUS J. HANNA    Pt. 3

We are now ready to take our second step up on the Major Pyramid Matrix of Truth.  Remember, all my additions to the Hanna manuscript are in bold letters.

THE SIDE OF LIFE – THE TONE OF SOUL with 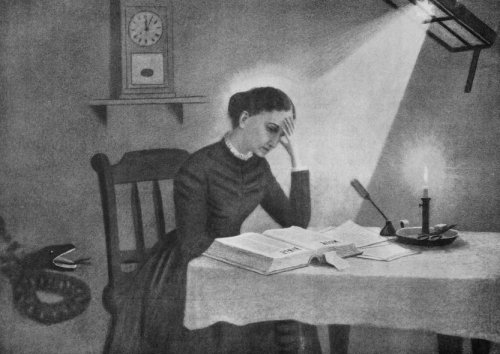 What the Beloved knew and taught
Science repeats,
Through understanding clearly sought,
With fierce heart beats;

But seek ye first the kingdom of God and His righteousness and all these things shall be added unto you.  Christ Jesus.

“What the First Witness, Christ Jesus, knew and taught, the Second Witness repeats through ‘dearly sought’ understanding.  She sought God’s kingdom first and His righteousness, and all was added unto her.  At this point in her life she had given up everything for God.
“The meaning of this picture is not hidden.  The woman with the leaven that had been hidden from the foundation of the world, is now revealed.  This picture reveals her as the Revelator of Truth to this age.  This is the next event in her life that has meaning to Christian Scientists.  ‘For three years after my discovery, I sought the solution of this problem of Mind-healing, searched the Scriptures and read little else, kept aloof from society, and devoted time and energies to discovering a positive rule.’  (Science and Health 109)  She is seeking and finding.  The Bible is an open Book to the Second Witness.”[1]
I feel that her right hand, her writing hand, is underneath the table because she has not as yet begun to write her Textbook – Science and Health.  Her writing quill is partially in the light and most of it is in the shadow.  This would be symbolic of the fact that Truth has not yet been completely revealed, especially in writing.  At this point she was making “copious notes” from the Bible – as shown in the illustration by the loose papers on top of the table.
Mary Baker Eddy was 44 at the time of her healing in 1866 and about 54 years old in 1875 (the time that this illustration designates is between 1874-75).  Hanna feels that this is why the candle is burned down so far.

The Grandmother clock in back of her depicts the time of 12:05.  This points us to the book of Revelation, chapter twelve verses one to five.  I am the only one I know of that has pointed out the fact that the time depicted on the clock is the same position of the Woman God-crowned Keystone in Window of the Open Book.

Revelation 12:5:  And she brought forth a man child [Christian Science], who was to rule all nations with a rod of iron [divine Science]:  and her child was caught up unto God, and to his throne [her child is protected].”  “This immaculate idea [the Christ], represented first by man [Jesus] and, according to the Revelator, last by woman [who would be Mary Baker Eddy], will baptize with fire; and the fiery baptism will burn up the chaff of error with the fervent heat of Truth and Love, melting and purifying even the gold of human character.  After the stars sang together and all was primeval harmony, the material lie made war upon the spiritual idea; but this only impelled the idea to rise to the zenith of demonstration, destroying sin, sickness, and death, and to be caught up unto God, – to be found in its divine Principle.” (S&H 565)

“Time.  Mortal measurements; limits, in which are summed up all human acts, thoughts, beliefs, opinions, knowledge; matter; error; that which begins before and continues after, what is termed death, until the mortal disappears and spiritual perfection appears.” (S&H 594)

“Serpent (ophis, in Greek; nacash, in Hebrew).  Subtlety; a lie; the opposite of Truth, named error [What is the name of the tenth illustration?  Truth versus Error (the serpent).]; the first statement of mythology and idolatry; the belief in more than one God; animal magnetism; the first lie of limitation; finity; the first claim that there is an opposite of spirit, or good, termed matter, or evil; the first delusion that error exists as fact; the first claim that sin, sickness, and death are the realities of life.  The first audible claim that God was not omnipotent and that there was another power, named evil, which was as real and eternal as God, good.” (S&H 594)

Revelation xii. 4.  And his tail drew the third part of the stars of heaven, and did cast them to the earth:  and the dragon stood before the woman which was ready to be delivered, for to devour her child as soon as it was born.

“The serpentine form stands for subtlety, winding its way amidst all evil, but doing this in the name of good.  Its sting is spoken of by Paul, when he infers to ‘spiritual wickedness in high places.’  It is the animal instinct in mortals, which would impel them to devour each other and cast out devils through Beelzebub.” (S&H 563)  Is not the spiritual wickedness in high places referring to men who run church governments and political governments?  Notice she says that the serpent does all it does “in the name of good.”  Mary Baker Eddy defines good as being “Spirit.”  So the serpent claims to be doing things in the name of God, Spirit!  What a liar it is.
In Revelation 12:4 do people understand what the third part of the stars of heaven means?  We are speaking about the woman God-crowned and she has twelve stars in her crown.  These twelve stars represent the twelve tribes of Israel.  One third of twelve stars would be four stars.  What are the four stars?  Well, there were originally twelve First Members of The First Church and in the Church Manual each one of these First Members had a star by their name.  Four of these stars were major stars as they had a “high place” within the Church Membership.  These four major stars were known as the Board of Directors.  When these Board of Directors were cast to the earth, into Adam thought, they disobeyed Mary Baker Eddy.  It was because of their disobedience that she even wrote a Church Manual.  It would be through the naughty Board of Directors that error would enter into Mary Baker Eddy’s Holy Church.
“The serpent is perpetually close upon the heel of harmony.” (S&H 564)  Why is this so?  Because it tries to bite the heel of the woman, but she is victorious and bruises and destroys its head.
Another explanation is given for the candle by the author of the Hanna manuscript.  “In Mark, chapter 4, we read, ‘And he said unto them, Is a candle brought to be put under a bushel, or under a bed?  And not to be set on a candlestick?  For there is nothing hid, which shall not be manifested; neither was any thing kept secret, but that it should come abroad.’  Indeed, that which was ‘secret’ from the foundation of the world was to be revealed.  The snuffer near the candlestick (glimmer of light) is ready to snuff out human opinion (the second degree), human goodness, and human wisdom.  She is reaching for the divine Light.  Notice the light emanating from her head; it is the inner Christ light beginning to shine forth, showing that she is indeed getting divine inspiration as opposed to human wisdom.”[5]
Mary’s ear is uncovered, and “she is deep in thought listening for her Father-Mother’s heavenly voice.  To ‘uncover the ear’ is to whisper or tell a secret or tell a secret to one. (I Samuel 9:15)  Again this is the secret hidden from the foundation of the world.”[6]  There are white frills on Mary’s collar and her sleeves, symbolic of purity in action and clarity of thinking.  Mary Baker Eddy told us that the Bible was her Textbook.  This is definitely being illustrated here.  The Christ Mind is illuminating the Word of God.  Malicious animal magnetism is unable to poison this type of clear thinking and acting.  “Her hand is in the inner Christ glow symbolizing reasoning reaching out to inspiration.”[7]  “I won my way to absolute conclusions through divine revelation, reason, and demonstration.” (S&H 109)
This ends this portion of the Hanna manuscript for the third illustration.  I would like to add that the star shining down its light is coming from the Morning Star (Venus).  I am not saying that the planet Venus has special powers over humans, that would be astrology.  What I mean is that the idea behind the Morning Star of Venus is what is being symbolized in these illustrations.  In other words, Venus was used as a symbol to represent the woman God-crowned in Revelation.  Mary Baker Glover is the vessel for God’s divine Light.  I also feel that the fact that there are four windowpanes points us to the divine calculus.  And the star seems to be shining its light through the window I would designate as being for the Word.
We are now ready to proceed on to the Side of Light.

THE SIDE OF LIGHT – THE TONE OF DIVINE SCIENCE with

For Christian Science brings to view
The great I Am, —
Omniscient power, — gleaming through
Mind, mother, man.

As in blest Palestina’s hour,
So in our age,
‘Tis the same hand unfolds His power,
And writes the page.

For whosoever shall do the will of my Father, which is in heaven, the same is my brother, and sister, and mother.  Christ  Jesus.

And there shall be one fold, and one shepherd.  Christ Jesus.

“The Lamb’s wife presents the unity of male and female as no longer two wedded individuals, but as two individual natures in one; and this compounded spiritual individuality reflects God as Father-Mother, not as a corporeal being.” (S&H 577)  This is Mary Baker Eddy’s explanation for Revelation 21:22:  “And I saw no temple therein:  for the Lord God Almighty and the Lamb are the temple of it.”  These quotes come right before Mary Baker Eddy’s explanation of Psalms 23 where the Lord God Jehovah has finally been spiritually translated back to its original Being of Love.
“This picture and its meaning is coupled with ‘Seeking and Finding.’  Through Science and Health, Mrs. Eddy has revealed the Two Witnesses.  It is the revelation of the same Light, but to human sense it appears as two different revelations.  The magnitude of the Light does vary in its brilliance.
“The shape of this picture indicates completeness, the completeness that is reached through Science and Health.  The unity of the two appearings of the Light as the same Light, will be seen by the world when the two witnesses are acknowledged.  Then and only then will there be universal or catholic religion.  Mrs. Eddy’s prediction for this century will then be fulfilled [which so far it has not been fulfilled].  Christianity will have its new name.  Notice the one ray of light reaching the clasped hands illuminating that unity, that forward step, that progressive understanding.  The clasped hands symbolize the unity of the Christ in Christianity and Science.  If Christian Scientists take Christian Science to the world in that light, creation shows anew.”[8]

Earth.  A sphere; a type of eternity and immortality which are likewise without beginning or end.  To material sense, earth is matter; to spiritual sense it is a compound idea. (S&H 585)

We are now ready to move up to the next step.

[1] Mrs. Eddy’s Explanation of the Illustrated Poem “Christ and Christmas”  as given by Judge Septimus J. Hanna; p. 10